The village of Bagdad developed as a lumber mill community in the early 19th century, and lumber remained the principal industry of the village until 1939. Strategically placed at the confluence of Pond Creek and the Blackwater River, the village became a major port. Around 1900 the village shipped more yellow pine lumber than any port in the world. An estimated 15 billion board feet of lumber was cut in West Florida during the 19th and early 20th centuries, leaving a mere three billion by 1909. The longleaf yellow pine forests were a source of great wealth for Santa Rosa County, and most of the county’s leading citizens made their fortunes directly from the lumber industry.

The Bagdad Mill Site has been home to a number of different companies that helped shape northwest Florida. Juan de la Rua tried to establish a saw mill at the present crossing of Highway 90 and Pond Creek in 1817, but was plagued by labor shortages. In 1828, Joseph Forsyth, an entrepreneur from Connecticut, purchased the land and established an antebellum industrial park that included the mill and a juniper pail factory. Two years later, Forsyth formed a partnership with brothers Andrew and Ezekiel Simpson to build the Arcadia Mill, the first and largest water-powered industrial complex in Florida. The Forsyth and Simpson Company purchased slaves to construct earth and ironstone dams, dig log flumes, and work the mill. By the mid-1830s Arcadia Mill was running two saws and shipping 5,000 board-feet of lumber a week on the mule-powered Arcadia & Blackwater Railway. When the mill became obsolete, Forsyth and the Simpson brothers built a new steam-powered facility on the waterfront and began construction of the village of Bagdad. During Arcadia Mill’s 38 years in operation, the site (a saw mill, a lumber mill with planing and lathing machines, a gristmill, bucket and pail factory, shingle mill, cotton textile mill, and silk cultivation operation) shaped the political and economic climate of northwest Florida. The steam engines were powered with sawdust, and fresh water came through a series of wooden pipes from a nearby spring. In the new mill, Forsyth employed skilled Northern labor rather than enslaved men and local white men for unskilled jobs. The company was reorganized as E.E. Simpson and Company in 1855 upon Forsyth’s death. On the eve of the Civil War, the mill produced $250,000 of products and employed 150 workers. 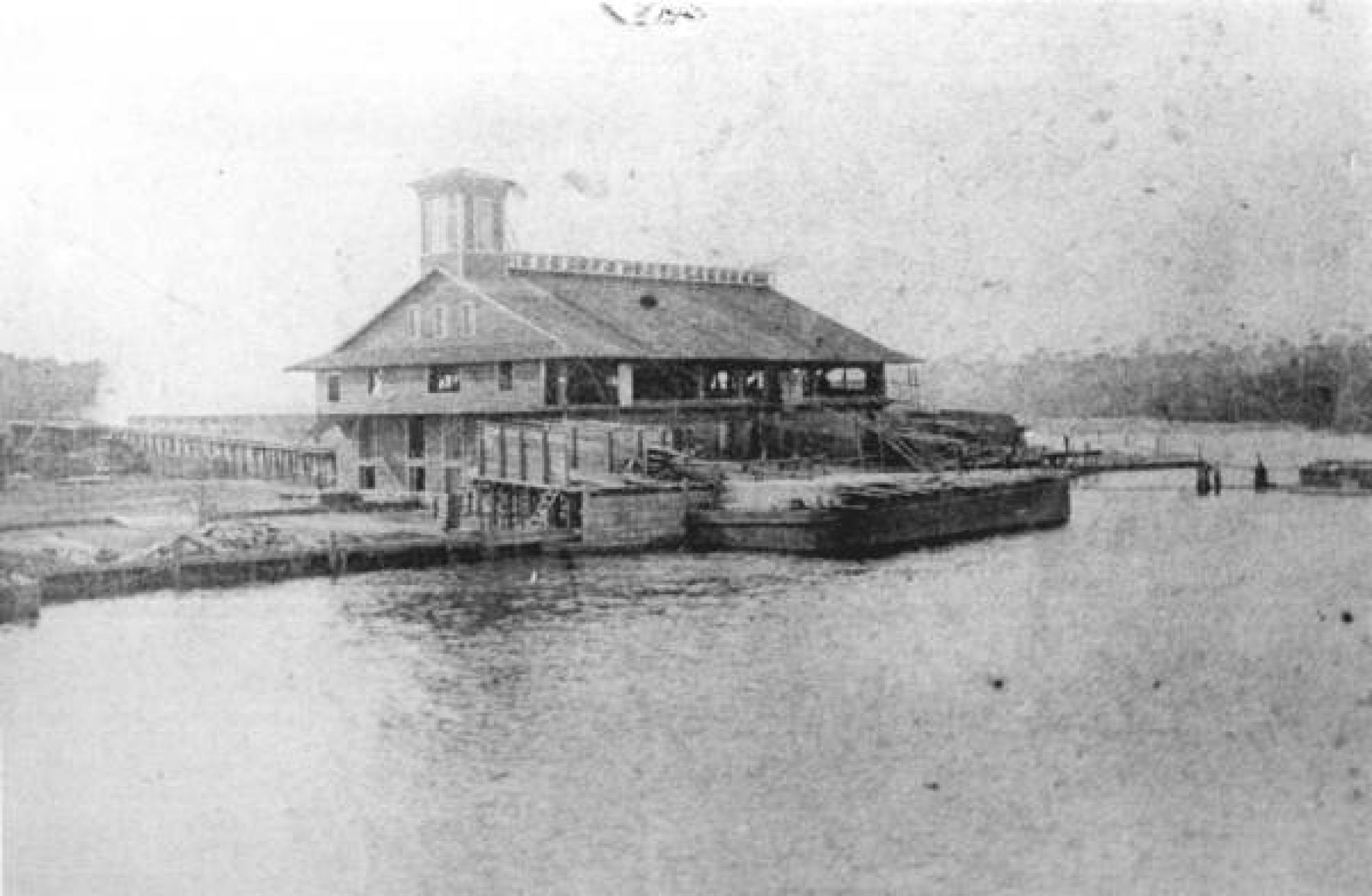 By the turn of the century, Simpson and Company was shipping lumber as far away as Scandinavia. Following the deaths of the partners in the Simpson Company, the lumber mill was sold in 1903 to Thomas R. Lyon of Chicago, who renamed it Stearns & Culver Lumber Company. At the time of the sale, the company owned 200,000 acres of timber land, a logging railroad with twelve miles of track, forty miles of log ditches, two sawmills, a planing mill, an electric light plant, two dry kilns, a fleet of lighters, and the tug Okaloosa. The new company pioneered new logging methods, and by 1910 employed more than 600 workers. Stearns & Culver was in operation until 1912 when the Chicago syndicate changed owners. The new company was first called the Bagdad Lumber Company, then the Bagdad Land & Lumber Company. The Chicago syndicate sold their interest to a group of Florida mill operators led by W.B. Harbeson, J.D. Henderson, and George O. Waits in 1922. By the 1920s the company was facing a shortage of timber and began to plant new pine trees. An article in the Press Gazette reported in 1929, “There is at least of 100 years of lumber left.” This would not prove to be true. The acquisition in 1930 of the Atkinson Tract, one of the largest stands of longleaf pines left in the United States, was not enough to sustain the company, and nine years later it closed. The last log in Bagdad was cut in April of 1939. The federal government purchased the timber land, which was later transferred to the State of Florida and became part of the Blackwater River State Forest. 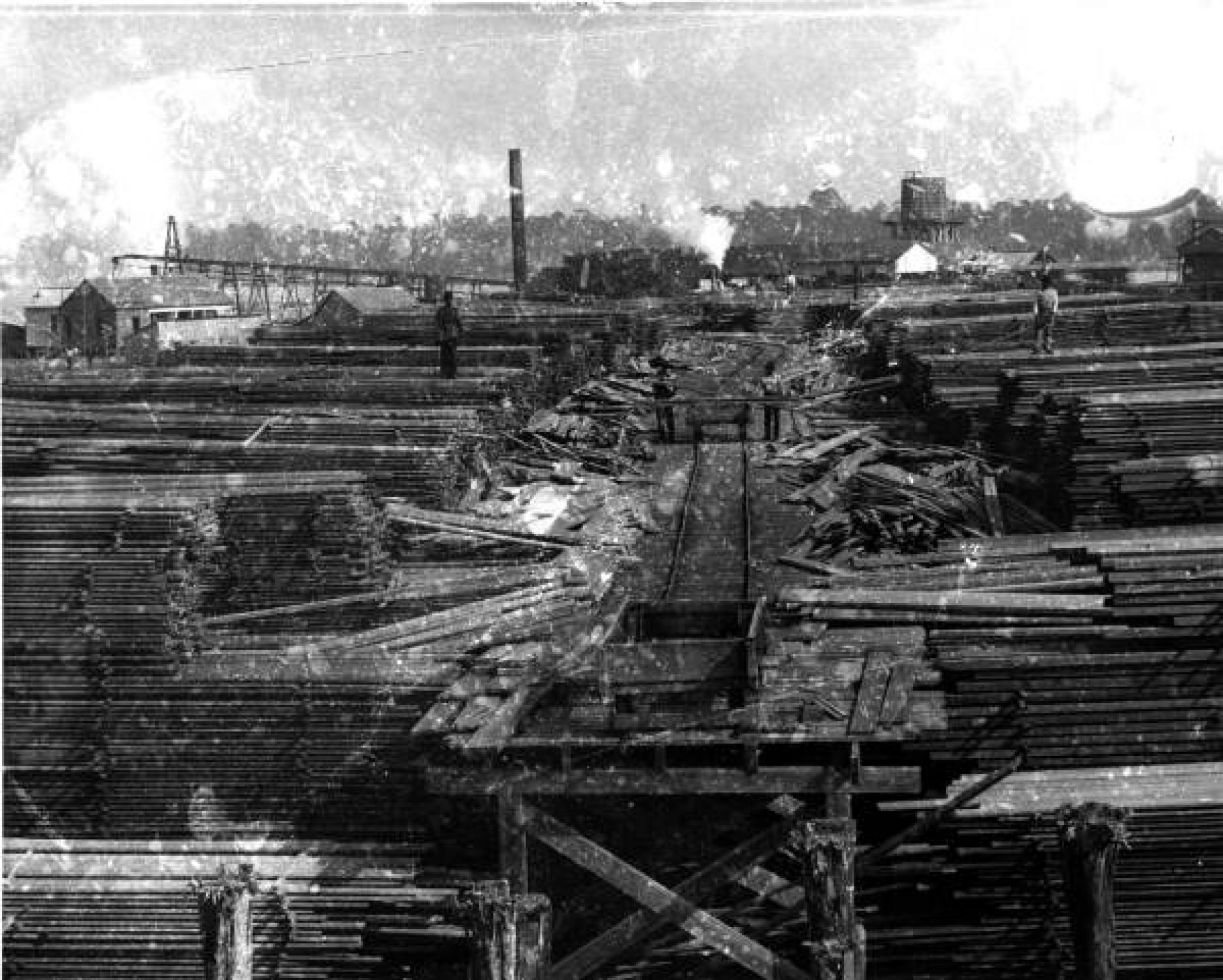 The closing of the Bagdad Land & Lumber Company in 1939 brought the end of an era. The industry that had created the community was gone, and the residents of the village had to find ways to survive. Other mills, plants, and businesses were located in nearby towns, such as the J.A. Chaffin & Company and the Bay Point Mill Company, but none of them rivaled the size and influence of the Bagdad Mill. World War II helped improve the economy of northwest Florida, and Bagdad prospered after President Franklin D. Roosevelt visited the Pensacola Naval Air Station in 1938. Whiting Field was built in 1943 to support training of naval aviators. After the war, the county helped upgrade Bagdad’s infrastructure, including the construction of a concrete bridge over the Blackwater River. By the 1950s, the population in the village stabilized at about 1,000 residents. As the rest of the county and the city of Pensacola boomed, residents continued to enjoy the charm of small-town life. The establishment of the University of West Florida in the late 1960s helped grow the county, and the listing of Bagdad in 1987 on the National Register of Historic Places helped preserve the historic village. Bagdad’s population at the beginning of the new millennium was 1490. 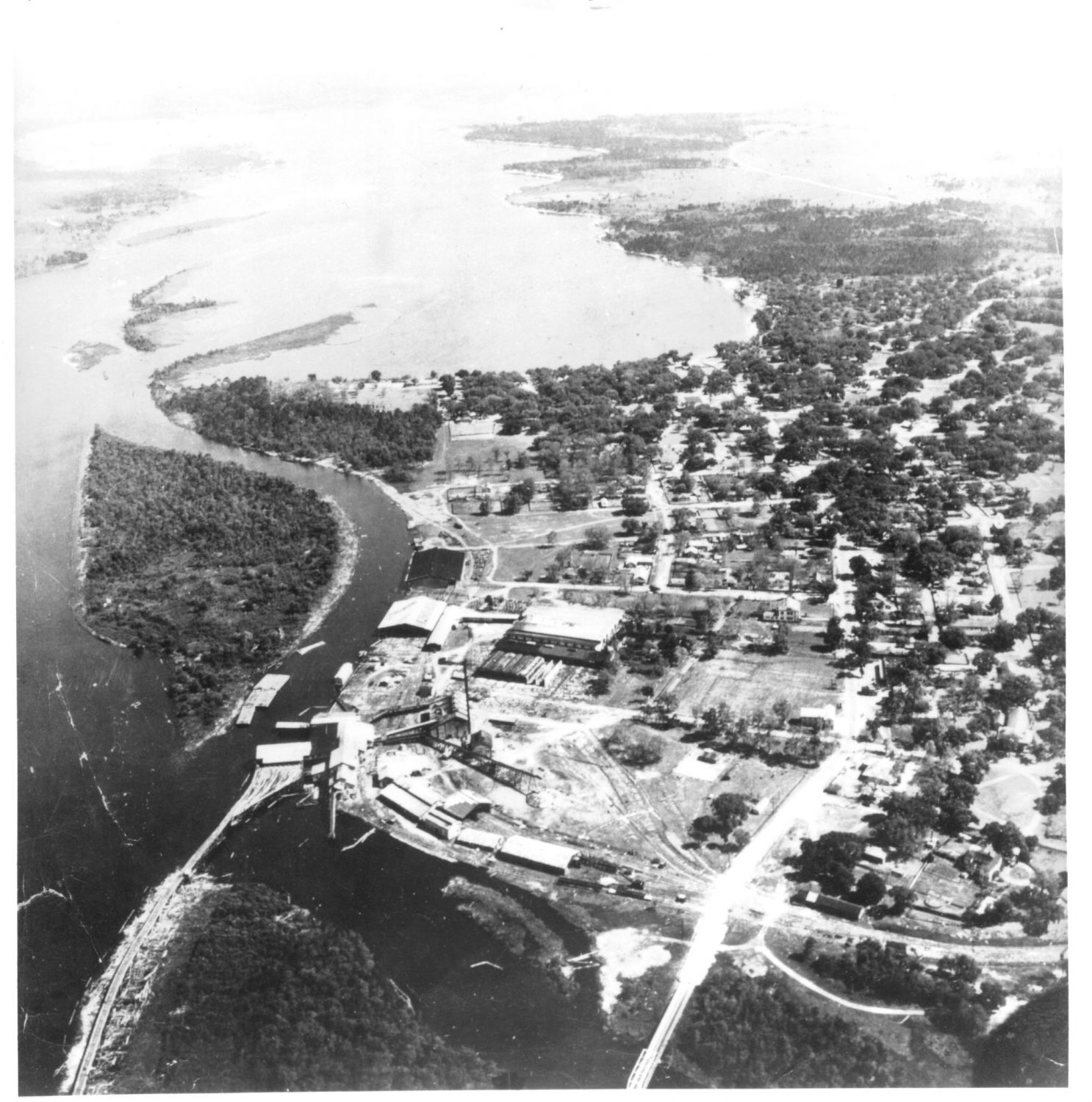 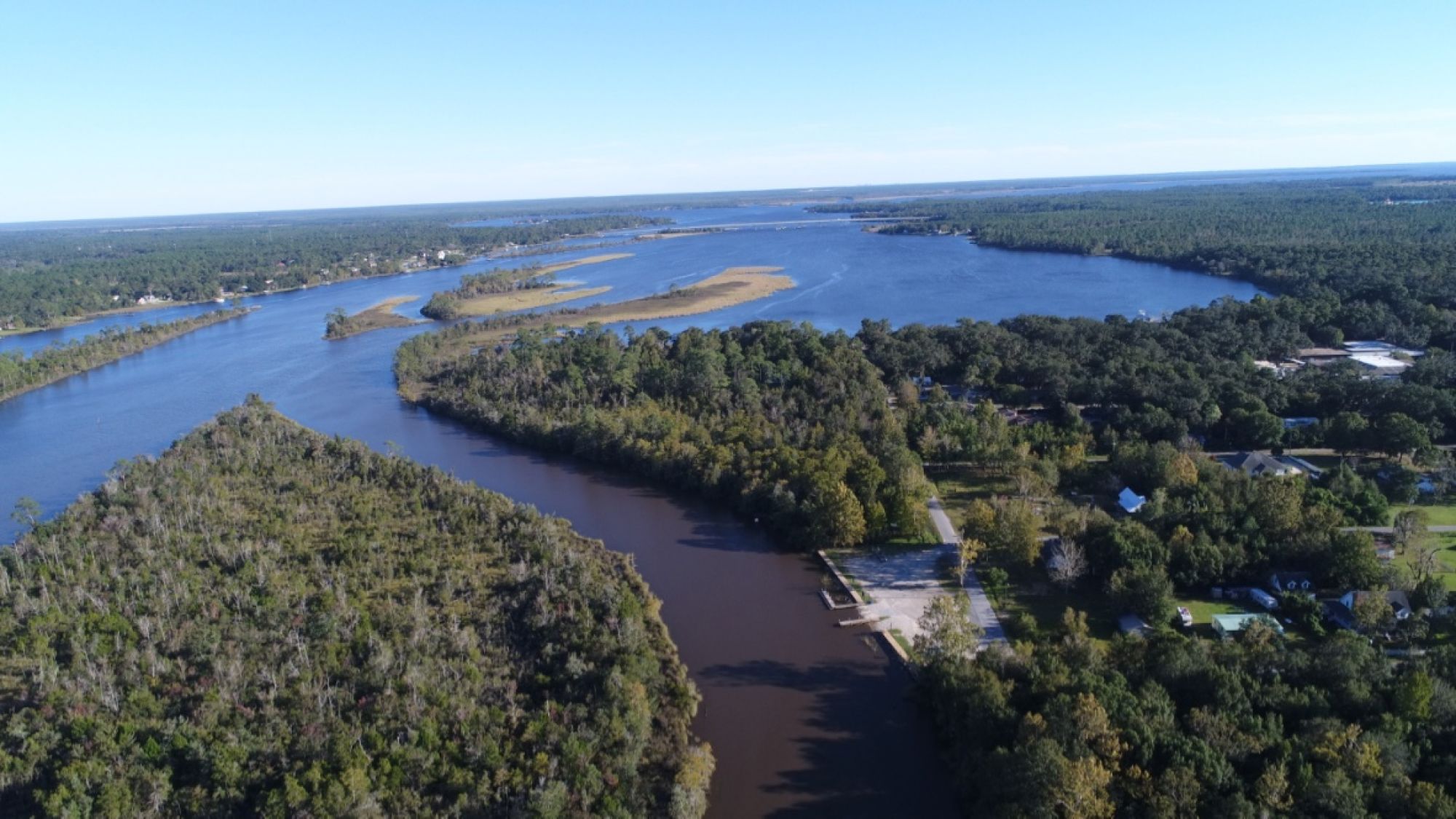 Since 2005, the Bagdad Waterfronts Florida Partnership helped develop the 22-acre Bagdad Mill Site Park to serve the community. The site was used as an asphalt company from 1995 to 1999. When the asphalt company was unable to secure a submerged land lease to continue their operations, it donated the land to the State of Florida with the provision that it be used for a park. Santa Rosa County subleased the site from the Florida Department of Environmental Protection’s Office of Greenways and Trails to develop the park. The Partnership worked closely with Santa Rosa County to help make this a reality. A technical assistance grant from the Florida Department of Community Affairs in 2007 to study the retaining wall along the river’s edge was the first step in determining what improvements needed to be made at the mill site. The study led to recommendation for the development of the Bagdad Heritage Trail, boardwalks, and walkways. A master plan for the park that would include a fishing pier, pavilion, dog park, picnic areas, and the trail that would eventually connect the Mill Site to the Blackwater Heritage Trail in Milton was developed. Volunteers logged more than 200 hours during 2009 helping to plant trees and install an irrigation system. The vacant concrete buildings left on the site by the asphalt plant were demolished in 2010, and a plan for the pier construction was completed. For more information about the Bagdad Waterfronts Partnership, visit bagdadwaterfronts.org. 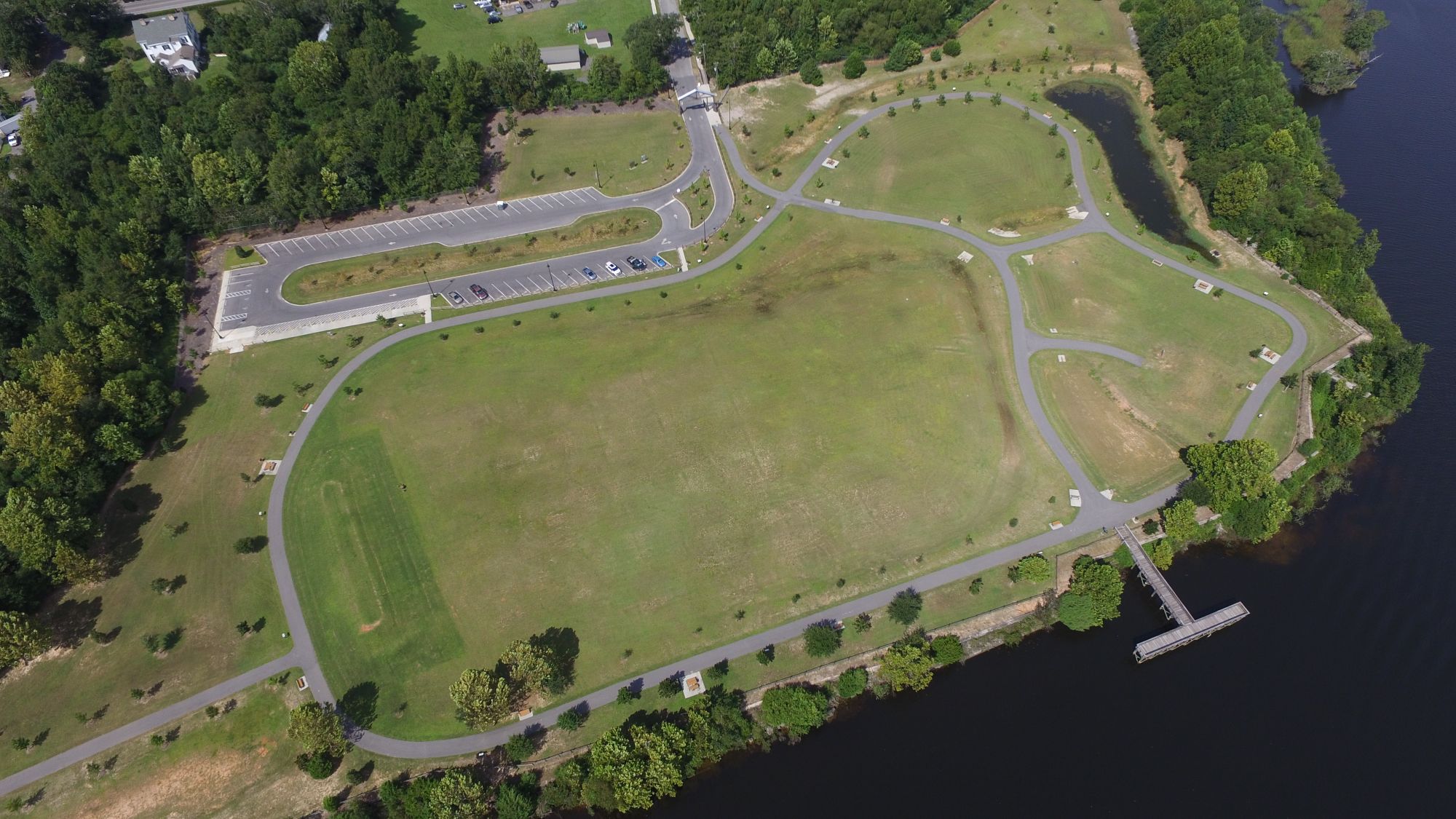